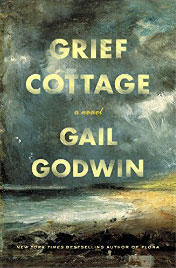 "People and Rooms": An Interview with Gail Godwin
A Conversation Between Gail Godwin and John Irving, part of a collaboration between the 92nd Street Y’s Unterberg Poetry Center and The Paris Review, was recorded live at 92Y on April 4, 1986.

An interview with Pia Z. Ehrhardt in Narrative Magazine

"Gail Godwin Talks of Her Fiction and Her Muses," by Herbert Mitgang, The New York Times, October 4, 1983.

"Composer and Librettist," Continuo: A Life in Music, by Robert Starer, Random House, 1987.

"Portrait of Gail Godwin: America's Cartographer of the Heart," The Washington Post Book World, February 14, 1999. [with color illustrations of some of Godwin's drawings]

"A Conversation with Gail Godwin," Brigitte Weeks, Ballantine Reader's Guide in the paperback edition of Evensong, 2000.

"Tea and Conversation," Gail Godwin talks about her latest book, Heart, a Personal Journey through its Myths and Meanings in an interview by Claire Whitcomb, Victoria, February 2001.