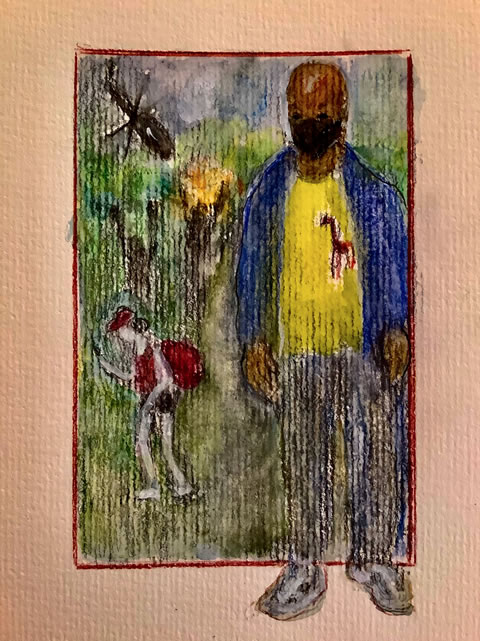 I have often thought that there has rarely passed a life of which a judicious and faithful narrative would not be useful.
–Samuel Johnson, “Biography,” Oct. 13, 1750

He was a lot bigger and taller than he looks here. His size thirteen (at least) sneakers have already broken through the lower red line, and if I had drawn him properly to scale his head would be soaring above the upper red line.

Much of the week I have been sitting in a dark room and living through my wide screen TV.  I have marched until my young legs ached and the sweat poured down my neck and my young shoulders were pink with sunburn. I have shouted and chanted until I was hoarse. I have had moments of doubt when I wondered what would be accomplished by my single body merging with the thousands of other bodies despite the need for social distancing.

I don’t remember which city he was in. All week the screen has been divided into halves or fourths or sixths or eighths so we could see what was happening at that very moment in Minneapolis, St.Paul, Los Angeles, New York, Washington D.C., Brooklyn, Philadelphia, Florida, Chicago,London, Stockholm, New Zealand…

It could have been the midwest United States at mid-day. The road stretched flat as far as you could see under a blue sky. Trees wore their early green leaves. The helicopter view showed a moving mass of tiny figures on the march. If you squinted, they merged into one giant organism bent on an inevitable destination.

I noticed him first for his largeness and because he was standing tranquilly on the edge of the road. The cameras noticed him, too, because they kept coming back to him. Tall, maybe six feet four, maybe more, and broad. The yellow shirt would have been an XXX-large. He might have shaved his head. He wore a black mask, a light blue jacket, a yellow tee shirt with a red giraffe stitched on the left pocket, and jeans and white sneakers. There he towered in his arrested stillness at the edge of the crowd.

He could have been eighteen or twenty or thirty. What would he go home to that night? A mother praying for his safety right now? A young family of his own? A dormitory room? A lover who loved him more, or a lover he loved more?

What was he thinking as he stood at the edge of the crowd? What were his dreams for his life? What did the red giraffe signify to him, or did he just like it?

He reminded me of Gerald, my late brother Tommy’s best friend. Gerald was extra-large, with a tranquil temperament. Tommy was high-strung and wary. They both had a crush on their high school English teacher and one night they hid in the bushes outside her bedroom until she called the police.

My phone rang in Iowa City.  “It’s Tommy. Bet you can’t guess where I am. Where are we, Gerald? Yeah, we’re in a convenience store in Rock City, Illinois. We’re running from the police! When I call again we’ll be in Iowa City and you can give us your address.”

Tommy was sixteen and I was thirty-four. I was finishing up my doctorate and living in a real house by myself for the first time. It was a gangly spinsterish house by the railroad tracks and I loved it. A state trooper was my landlord and his wife talked him into carpeting the kitchen because it would be a good investment. There was also a new double sink and a dishwasher, but they hadn’t gotten to the upstairs yet. I had to hold down the handle when I flushed the toilet, and the old-fashioned bathtub on legs took forever to drain.

They were freezing when they arrived, both wearing tee-shirts. When you are running from the police, there isn’t time to go home for a coat and a toothbrush. They had driven sixteen hours and were elated with their escape. Wearing one of my sweaters, Tommy narrated their adventure and big Gerald, wrapped in my faux leopard blanket, smiled tranquilly. Tommy slept on a couch in my upstairs study and Gerald slept on the sofa downstairs.

Next morning, someone ran a bath. A while went by. Tommy was still sleeping in my study. More time went by.

“Tommy, I’m sorry to wake you, but Gerald has been in the bathroom almost an hour. Would you go and see if he’s okay?”

Tommy went to see. I heard them mumbling in the bathroom.

“Everything’s fine,” Tommy came back to report. “He’s just standing there in his towel waiting for the tub to drain so he can wash it out.”

“That sweet, quiet boy,” Mother said. “He just got in with the wrong crowd.”

Tommy majored in accounting and hated it. He had wanted to be a highway patrolman but everyone, even his state trooper friends, urged him to go to college and “then see.”

Gerald was paroled, worked in construction for a while, then went to prison again.

“It has a name,” said Tommy. “It’s called recidivism.”

When Tommy took his own life at age twenty-nine, Gerald was still in prison. Both of them would be sixty-six now.

My priest-friend and former rector, Tom Miller and I have been e-mailing. He was going to come to visit me in April, but the coronavirus came instead. He lives in Greenwich Village now, having spent some years as the canon for St. Mary’s church in Stromness in the Orkney Islands.

On Thursday, June 4, he wrote:

Gail, The Prayer Book daily lectionary this week recommends reading from the first five chapters of Ecclesiastes. I have found them a balm for the soul and all our troubles…all our troubles. 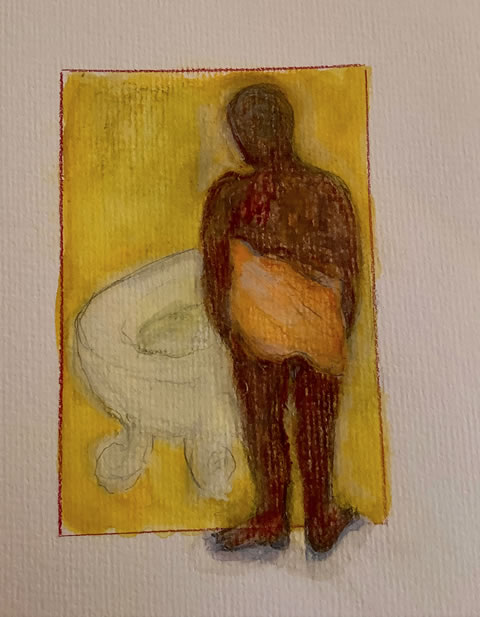 I took my King James up to bed and read the first few chapters of Ecclesiastes. Whoever wrote this certainly hit the spot. Then I decided to take an afternoon nap. For the first time in a month, I had gone back to Snowdrop, my new novel. It was still there, still alive! It allowed me to continue on as though I’d never been away. And now I owed myself a nap. But I couldn’t fall asleep. So I went downstairs and turned on the TV and heard the Reverend Al Sharpton preach at George Floyd’s funeral. He structured his eulogy around Ecclesiastes 3. “To every thing there is a season, and a time to every purpose under the heaven.”

“We need to know what time it is,” he preached.