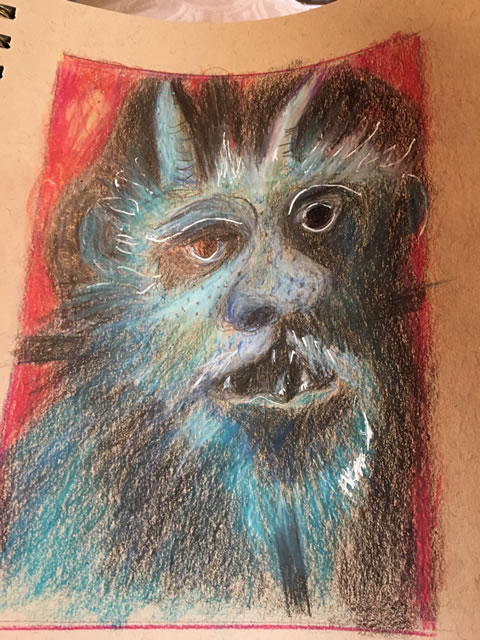 screed
1. a ranting piece of writing
2. cement-like material laid onto a floor to create a smooth level
(from Old English screade, a piece cut off; a shred.)

When I woke up, I thought I was going to do a blog about the essay I am writing about “How characters look.”  Or maybe start with the  incomparable hour-long video interview Caroline Leavitt did Friday night with John Irving on “A Mighty Blaze.”  (You can find it by going through Facebook or Twitter or Instagram).

But then I took an imprudent detour through the TV room and caught one more shameless lying face on a morning show.

I came to television late in life, and it wasn’t until after Robert died that I tuned in to the Sunday morning shows he used to watch while I was at church. Now, facing my super-Smart TV screen that reveals with deadly precision whether the soul of the speaker is true or false, I remembered a conversation with a best friend in fifth grade. We had started off by her telling me that her country club pool now had a substance that turned your pee-pee red if you did it under water.

We both cackled as we took it one step further.  What if, (he-he-he), they invented a substance you could spray on people to show when they were lying? Or even better: a kind of invisible light you could shine on their faces without them knowing.

Well, if she had been granted a longer life, she would have enjoyed that invisible light on her own state-of-the-art TV set at home.

The man on my TV screen this morning, a member of the current administration, was answering by not-answering the anchor’s question: could he really pledge we would have a covid-vaccine for every one of the million persons in our country by the end of the year? As he would continue to do, he began by addressing her by her first name. He said, “So, _______, I wouldn’t use the word pledge, but…” He preferred more of an anticipate-type word, I forget which word, because I had switched off his words by then and was marveling at the red pee-pee all over his countenance. It was welling up in the slightly nervous glitter of his eyeballs, smeared on top of his mask of preparedness, crimsoning his complacent armor of one who thinks he is on the right side of the Powers That Be——for the moment.

I have to say I gave thanks for the super Smart medium that allows me to peer into his soul. What I have learned from this medium has also helped me when I’m writing characters. I look long and hard at the faces on my TV and transfer what I’ve learned when I’m trying to describe what I see welling up in the eyeballs of a false character.

She had large, dark, well-shaped eyes and very dark hair, which she wore tangled about in an extraordinary manner, and she had an expressive face—

made expressive by the owner’s will. Such power of expression is often attained by dint of labor—though it never reaches to the expression of anything in particular. She was almost sufficiently good-looking to be justified in considering herself a beauty.

Now there’s a masterful backhanded description of Madeline Demolines, who will ruin Johnny Eames’s most sacred mission by the end of the book. This is from a dinner party halfway through Trollope’s  The Last Chronicle of Barset, a novel that I wish would never end.

But what about the True characters? What have I learned from TV about how to write their exteriors? Since this is a screed, I’ll save the true ones for another time. Oddly, or not so oddly, the true ones are harder to describe.

I might as well admit that what lies beneath this Sunday screed is a helpless form of dread. How long is this state of things going to last? What if we never get back to “the way it was” ? You know what I’m speaking of. You feel it, too. It’s beyond the plague who has so far killed 90,000 of us in this country alone.

It’s the invisible spreading virus that can kill the soul. Time is getting short. Why can’t more people see the tell-tale red snaking through the water of the swimming pool? What can I do, what more am I ABLE to do than I’m doing, to help them see the red? 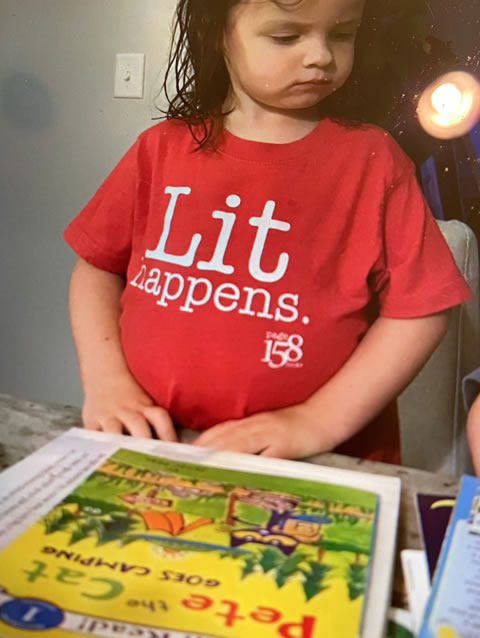 The little girls in the photos are the 4-and 5-year old daughters of novelist Wiley Cash and his wife Mallory. Juniper is on the left, her sister Early is on the right in the sofa picture.  Juniper is the one wearing the LIT HAPPENS tee-shirt. Sent this morning. The family is quarantined at home in North Carolina.

I met Wiley before he was a star, before he even had an agent (but was trying to get one). He asked if I would read the manuscript of his first novel, A LAND MORE KIND THAN HOME.  Even in that earlier draft it had the mood and subject matter of Greek tragedy and I told him so.  Now the sisters are cozy under their blankets, enjoying their books in safety. When they are older, they will have good memories to look back on. (“Remember when we were all in the Great Pandemic that swept the world back in 2020?”) 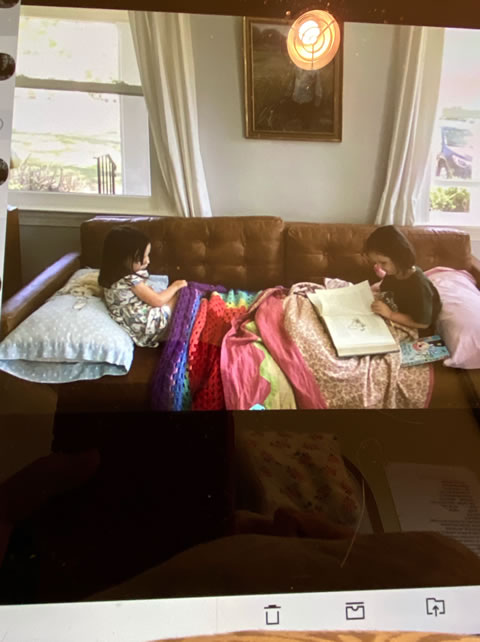