16 Days Until the Election 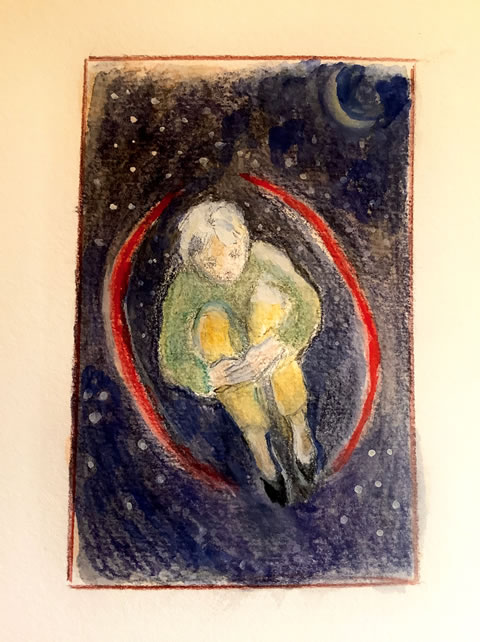 “When will this end?” my friend Heather wrote. “Sometimes I feel my life is in suspended animation…or trapped in a pair of parentheses.”

Inside parentheses is where I’m living, too. I’ve been clenched inside a provisional state of mind since July. That’s when I stopped doing some things, put them on hold because they were too fragile to compete with the collective anxiety flooding the world.

Best to fill in the time with less important things until the certainty came back.

But what if it didn’t come back?

What if certainty was never there to begin with?

Is this the lesson I’m supposed to be learning?

I have stayed away from my blog, which falls into the “fragile” category. My blog is personal, tentative, subject to correction, a risky public offering of thoughts in progress. Why toss it into the roiling flood of bulletins false and true?  Back in July I stopped work on a promising blog called “The Writer in Old Age.” I had done the opening drawing for it. The possibilities of such a subject seemed limitless. I already knew more about it than I knew ten years ago.

Maybe I would collect the essays into an illustrated book. I got so excited I had to stop and scribble side-notes of things I wanted to put in.

Helen Rose’s Old Age: Odysseus’s two possible final journeys—either to be tempted toward repetition of your earlier triumphs, or to set forth into unknown territory, guaranteed to be painful but exciting.

The photo below is now. Sunrise at 7:15 a.m. EDST in Woodstock. The sun is moving to the right. By mid-December it will be outside this picture. “For you, summer starts at Winter Solstice,” my friends like to tease. I expect many people feel this way. The dark has hit bottom. Now the only way is up.

What will be the state of our country by mid-December? I can’t predict and (though many are trying) no one else can, either. That’s why my mind is in a clench. 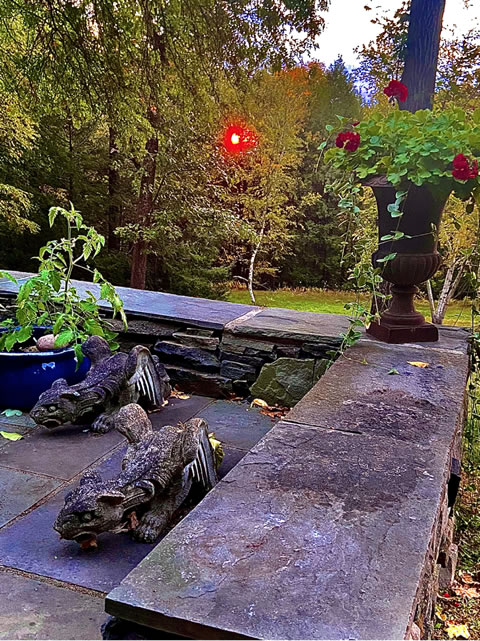 Parentheses are agile and amiable punctuation marks, eager to  serve you in all kinds of ways.  They can be dropped anywhere inside a sentence or passage, though the sentence or passage has to be grammatically complete without them.

In Prince of Stories:The Many Worlds of Neil Gaiman, biographer Hank Wagner tells us Gaiman fell in love with parenthetical statements while reading C.S. Lewis’s A Grief Observed, “where he would just go talk to you, address a private aside to you. It was just you and him. I’d think, ‘Oh my gosh, that is so cool. I want to do that!’”

Parentheses can confide, qualify, amplify, digress, amaze, amuse, shock. As a teenager I sprinkled them liberally in my weekly letters to my best friend Pat, whom I had to leave behind when my family moved from Asheville.

Roger (yes, that Roger!) came by the house!

I continue to discover how other writers use them, and help myself to the examples. (“Oh my gosh, that is so cool. I want to do that.”)

[Mr. Ramsay, stumbling along a passage one dark morning, stretched his arms out, but Mrs. Ramsay, having died rather suddenly the night before, his arms, though stretched out, remained empty.]

-“Time Passes” section of Virginia Woolf’s To the Lighthouse

Parentheses began showing up in the 14th century. While copying holy writings, scribes would use chevron brackets to set apart words that had been quoted from other sources or to indicate separate or earlier names for the subject matter. At some point someone softened the chevrons (< >) into half-moon-like parentheses, which 16th century philosopher and biblical scholar Erasmus would later name “lunulae.”

I am writing this because a few days ago I warned myself:

You’ll be sorry if you don’t write a blog about how it felt living inside your present parentheses. You will need to have a report from that time.

I wrote steadily until I screeched to a halt at these questions:

-How will it be when this parenthetical state of mind is over?

-Or, will something worse have replaced it?

Then fortuitously I happened upon “Pain and Parentheses” in the April 26, 2014 issue of the New York Review of Books. In this essay Christopher Benfey is looking for literary examples of “bracketed pain”:

(“…windows in a wall of verse or prose that suddenly opened on an expanse of personal pain. Masquerading as mere asides, they might hold more punch than parentheses are usually expected to hold, more even than the surrounding sentences, and have all the more impact for their disguises as throwaways.”)

His essay uses Nabokov’s famous bracketing in Lolita as an epigraph:

“My very photogenic mother died in a freak accident (picnic, lightning) when I was three.”

Benfey then cites the Mr. Ramsey example I quoted above, adding perceptively that “the parenthesis movingly mimics Mr. Ramsay’s outstretched arms opening on nothing.”

Professor Benfey did not come screeching to a halt as I did when I asked, “How will it be when this parenthetical state of mind is over? Will something worse have replaced it?”

With a scholar’s deft weavings, he builds his essay via his sources (Emerson and Wittgenstein, Emily Dickinson and David Jones) to formulate a question of his own: Is it possible to imagine a life in which suffering and pain are part of our ordinary existence, NOT BRACKETED OFF?

Benfey, an Emily Dickinson scholar, concludes from a paragraph in Emerson’s “Experience” that Emerson “refuses to bracket grief.” I can’t quite follow his conclusion, though I’ve just re-read Emerson’s essay on Experience.

However, David Jones, WW I poet and painter, wrote a whole book about the relation of pain to parentheses. He titled it In Parenthesis because “I have written it in a kind of space between—I don’t know quite what.”

Jones goes on to say, “…the war itself was a parenthesis—how glad we were to step outside its brackets at the end of ‘18. He also surmises that “our curious type of existence here [after the war] is altogether in parenthesis.”

How can I end my blog without a conclusion? I apologize, but composing it has kept my anxiety over the election at a distance for most of today.

(I have ordered Christopher Benfey’s memoir, Red Brick, Black Mountain,White Clay: Reflections on Art, Family, and Survival (2012), as well as David Jone’s In Parenthesis, and will report later on whether I 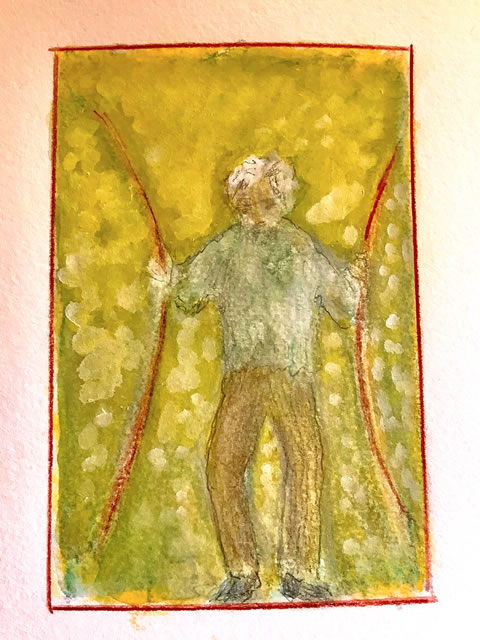 believe one  can “just say no” to the parenthetical life, like Emerson, or that there are always more parentheses looming.).