Carrie, who is both 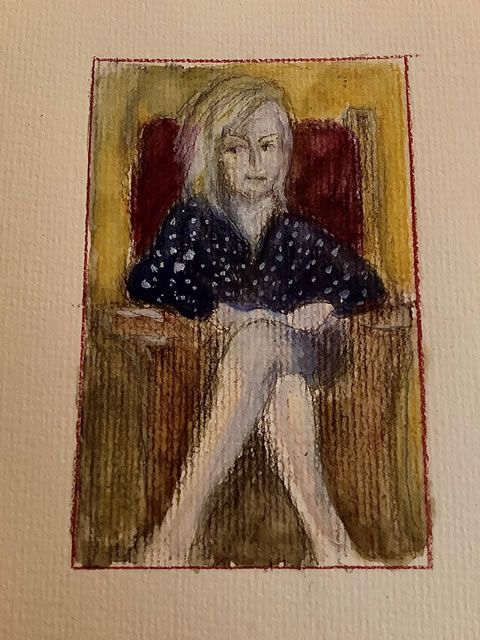 In June I had a birthday, which I was planning to spend alone in Woodstock. I had some soul work to catch up on and didn’t mind at all. But then Carrie phoned from Plainfield, New Jersey. “May I come up in the early afternoon, stay two hours, and then leave?”

Carrie and I recognized that we were kindred spirits on the day we met. She was then eight and I was thirty-six. We were at life-changing turning points.

After a year of letter writing, Robert and I had gathered courage to let go of our moorings and try life together in an old Dutch farmhouse in Stone Ridge, N.Y.

And Carrie’s family had moved full-time to their weekend cottage in Stone Ridge. I had met Carrie’s father once, when he was the editor of Esquire magazine which had published two of my stories. Carrie’s mother Suzette dropped by to introduce herself and brought her daughter with her.

Carrie’s new book and the mask 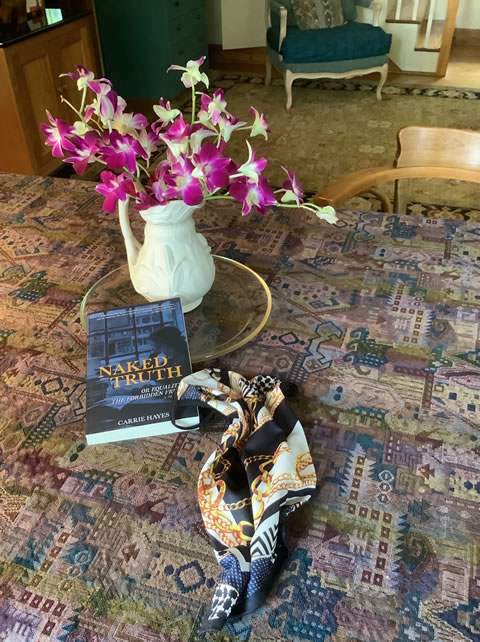 For her visit to Woodstock on my eighty-third birthday I was about to bake a cornbread pear cake and had all the ingredients out on the counter but she arrived early, bearing a sour cream Bundt cake (“I know you don’t like them too sweet”), fresh strawberries, lemon yoghurt, and the gift of a stylish Hermes-like quarantine mask.

It was too hot to go outside, so we sat ten feet apart on either side of the fireplace, Carrie in Robert’s old Stickley chair, me on the sofa across from her. Since we were ten feet apart. I could drape my new mask fetchingly around my throat, like Nancy Pelosi.

Robert used to say that each time he saw me again I was better than he remembered. Each time I see Carrie again, she is better than the last time I saw her.

So here we were, forty-seven years after our first meeting, once again at big-time turning points in our lives.

When her mother brought her along to meet me back in Stone Ridge, Carrie had left her school in Manhattan to begin third grade in the rural elementary school. Her tormenters swarmed on her like  bees on a strange new blossom. She spoke differently and looked more like twelve because she was the tallest girl in the class and wore  dresses when everyone else wore jeans. A popular malicious bully targeted her for his aggressions on the school bus. His older brother was Carrie’s older brother’s friend, so he got away with it at first.

I was alone in the country from Tuesday to Friday when Robert went down to the city to teach at Juilliard. I was writing my third novel, The Odd Woman, which would be my “break-through book” and a finalist for the National Book Awards. I loved inviting Carrie to spend the night. We would dine over candlelight and let our active minds gallop around the table.  I would always leave a book by her bed. She hadn’t read Jane Eyre yet and it was the perfect time. She cried herself to sleep after Jane woke with her dead friend Helen in her arms.

As the years passed, Carrie would often say about  a book she loved, “It had something for all the shelves of my mind.”

At age twelve she was not flourishing in the local school and said she wanted out. Her mother came up with the idea of an English boarding school and I heartily seconded it. Her father said, “Do you think I’m made of money?” Her enterprising mother went to visit Carrie’s godparents in England. It turned out that Battle Abbey (13th century abbey, Battle of Hastings, tower built for Elizabeth the first, and four miles from Carrie’s English godparents’ house) would cost a fraction of the tuition at New York schools.

So Carrie embarked on her life’s education: Battle Abbey, Benenden, Wake Forest, Sara Lawrence, interspersed with interruptions for an early love-marriage, a daughter, Olivia, teaching and working in theater in Luxembourg, burning some more bridges and starting over again in the states. (“YOU look back and see the Carrie who was discerning and deliberate,” she reminds me. “Whereas I remember the Carrie who was a fireball of passion  and anarchy.”)

And I stayed on with Robert until his death thirty years later and wrote my books and was rewarded by some recognition and prosperity. 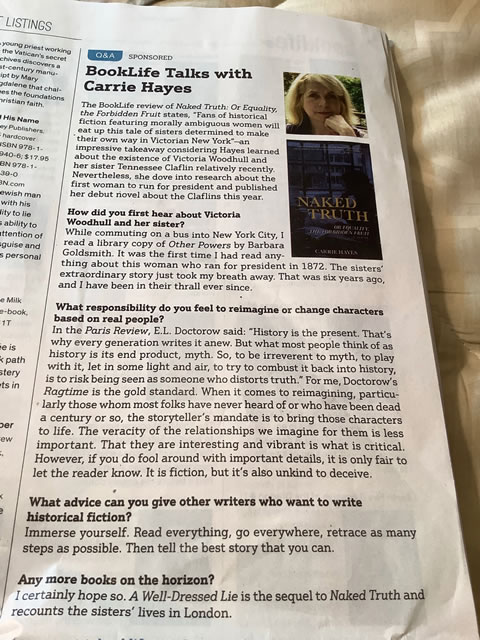 And now here we are in Woodstock forty-seven years later, once again at big turning points in our lives.

My sixteenth novel Old Lovegood Girls, a novel about a long friendship, was published in May. The Corona-virus made Zoom book tours the order of the day.  And the plague continued to hang over us like a miasma. My solitude deepened and spread and In that quiet new empty place I experienced a gush of freedom. Whatever happened in the world, it was the home stretch for me.  “Now I can do anything I want,” I suddenly realized.  “I can even afford to FAIL!”

And Carrie, having “walked abreast of her days…knowing what was true in her private heart,”( as Emerson puts it in his essay Self Reliance), having married young for love and raised a daughter, Olivia, and then brought up another set of children belonging to her second husband in New Jersey,  having, through study and teaching, kept the shelves of her mind generously stocked, has now published a first novel for the shelves of other passionate readers’ minds. She self-published it largely from the earnings of her Airbnb houseguests, who are patients of a world-renowned acupuncturist living 5 miles from her who specializes in macular degeneration. (“They like staying with me because I don’t charge very much and will drive them to and from the doctor.”

In 2015 she had read a book on the bus about the first woman who ran for President of the United States (in 1872, before women could vote!) and was swept away by the story of the two Claflin sisters, Victoria and Tennessee. Their creative daring reminded her of her mother. The other angle that struck Carrie was how much of what we are living through now is a repeat of the Gilded Age, when corruption was rife and duplicity was the norm, and scammers and activists and elites populated the map.

Five years and fifteen drafts later, after trying 75 agents, she called on her particular strength of self-reliance and set about making Naked Truth available to readers for the Women’s Suffrage Centennial in 2020.  She had to print, design, distribute, price, and publicize, all without going through the portals of traditional publishing. She had to hire her own editors and go to seminars to learn how to pitch her product. (“You cannot begin the publicity marketing plan early enough.”)

She began as early as 2016, traveling to England for The Historical Novel Society Conference.

She discovered self publishing to be an entire world. “The network is very positive. It’s a lot of like-minded people, kind people, who want the same thing you do.” She reckons she spent a total of $7500 by the time she pressed “publish.” This included paid reviews in Publisher’s Weekly and Kirkus.  A good review is not promised, only a  “professional” one. However, if you do get a positive one you can use it in your publicity.

…Hayes writes with such care and authenticity the reader will likely be unsure where the history ends and the fiction begins.

Carrie departs. The sun sets. The earth cools down enough to sit out on the terrace. It is still my birthday. Actually, I was born as the sun was setting in Alabama, 83 years ago. I am full of thoughts. Because of Carrie’s visit, I am doubly full of thoughts. Within this year, I have lost two friends I deeply miss. Both have the same first names.

People are always saying that we carry the dead with us as long as we live. But this year I have learned that when certain friends die they carry off parts of us that can never be replaced. Rob Neufeld edited the journals from my apprentice years, The Making of a Writer, volumes I and II. Rob knew my work better than anyone. When he died last October from Lou Gehrig’s disease, he was completing his book on all of my novels and stories to date. It was called The Art of Becoming.   Robb Forman Dew had been the best and first reader of my novels in progress for close to 40 years.

Carrie tells me that it is becoming a tradition in the freemasonry of self publishers to include a Call to Action on their last page. Hers reads: 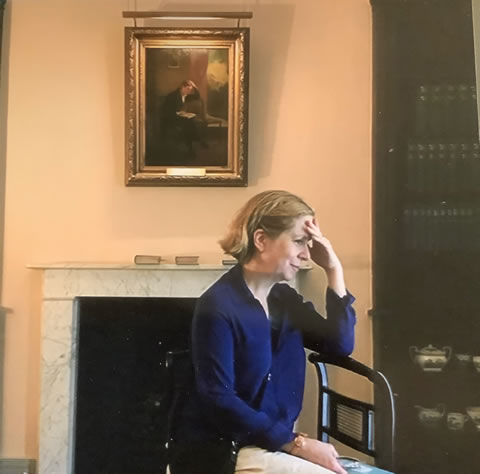 Dear Reader, Thank you for reading this. If you didn’t know who Victoria and Tennie were, now you do. I wrote this book not only with the hope of breathing new life into their story, but also to inspire you, if just a tiny bit, to take chances and to do incredible things. Because, Reader, at the end of the day, it doesn’t matter if one’s efforts go unheralded. Incredible things are still worth doing. What matters is that you did them.

Carrie in Keats’s room, under his portrait, photo by daughter Olivia O’Brien, 2016