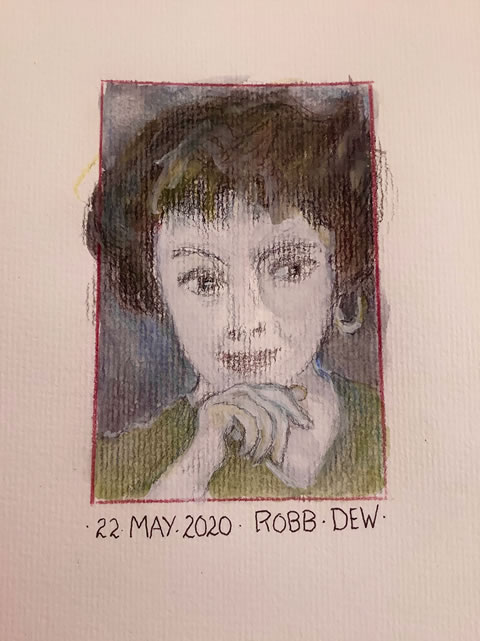 “The profound and the mundane are joined at the hip, and each one is dependent upon the human ability to recognize the other.” —Robb Forman Dew, Being Polite to Hitler (2011)

Last Monday morning I picked up the phone.

“Gail? this is Charles Dew.”

“Charles? Is this bad news?”

Indeed it was. Robb was dead. Complications from endocarditis, an inflammation of the heart’s inner lining. Because of the coronavirus, Charles and their sons Steve and Jack were unable to be with her in the hospital when she died.

The best obituary, which rises to the art of a literary portrait, is the May 27th one by Harrison Smith in the Washington Post. Robb Forman Dew, novelist who charted daily life’s shifting emotions, dies at 73.  In the online obituary, you can see the covers of her first and last novels: “Dale Loves Sophie to Death,” which won the 1981 American Book Award for best first novel, and “Being Polite to Hitler,” (2011).

“Dale Loves Sophie…” refers to graffiti seen scrawled under a railway bridge.  “Being Polite…” is a wife’s accusation hurled at her husband while they are arguing about the Rosenberg spy case.

I have spent a quiet week here on the hill with a baffled sense of absence. Again and again I play back how I picked up the phone and a man’s voice said: “Gail? This is Charles Dew.”

And then I try to make the jump to all the times over the last forty years when I have picked up the phone and a woman’s voice said: “Gail? This is Robb. I won’t keep you long, but…”

And an hour and a half later, I would hang up, enlightened, enlarged…somewhat exhausted. When Robert was still here, he would say, “That must have been Robb. No one else makes you laugh like that.”

“This is just something I had never even thought to dread,” I told Charles. “I am ten years older, I was the one who was supposed to go first.”

Likewise, he said. He’d had it all securely planned out. A Williams College professor of Southern history, he was also Robb’s senior. They had been married for 52 years. “I was going to go first,” Charles said, “after I had set up everything so they could get on with their lives.”

Robb has been the trusted reader of my manuscripts-in-progress since the early 1980’s, I will not use the word was.  Robb’s voice will continue to judge and praise and suggest as I write my future books. Just as I continue to hear Robert saying “Let me do that,” every time I carelessly fold a grocery bag, though there are fewer of those today.

(“Gail, you might not want to call your college president Garth Brooks in Old Lovegood Girls, because he’s a well-known singer.”

“Gail, this is just brilliant. But I have a sneaky feeling you’re going to do more with Cousin Thad. I think you have put him in there for a larger purpose.”)

The ideal reader of a writer’s unfinished work is a priceless gift. She must know what’s good. She can focus her critical eye and see what can be removed or changed and what possibilities are just throbbing to serve   a larger purpose. Even rarer is the reader who can still make you feel wonderful and admired while fulfilling her critic’s job. (“How did you DO this, Gail?)

Out friendship began with one of our few face-to-face meetings. I gave an afternoon reading at Williams College, and afterwards, Robb and her friend Nancy Thayer came up and introduced themselves. Neither of them had published novels yet. Then Nancy stayed on to chat but Robb had to rush back to relieve the babysitter. She was crushed, she explained to me later. But all ended well, because Charles insisted on staying home that night while she arrived at my hotel with a bottle of cold champagne and a bowl of warm popcorn.There was instant rapport, the amazed satisfaction of having met a kindred spirit. From that time forward we continued our conversation over the telephone. This was before e-mail.

Robert and I went to New York for Robb’s publication party when Farrar Strauss and Giroux brought out Dale Loves Sophie to Death, and we drove from Woodstock to Williamstown to spend two Thanksgivings with the Dews. If I’m not mistaken, that was the extent of our face-to-face meetings. I never saw Robb with gray hair. There is a delightful passage in her unpublished memoir Writing for My Life when she and her dying mother are talking about their looks, and Robb says her own hair now looks like a Q-tip.

We  talked exhaustively, passionately, about writing: The craft, the snares, the tools, the choices. (“I am most comfortable being God,” Robb comfortably mused, while we were comparing first person narration to third-person omniscient.)

We talked about food. You will find recipes throughout her novels. In one novel, the protagonist is grinding each curry spice separately. (Robb’s chicken curry baked with yoghurt and sour cream has never let me down.)

And LOTS OF POLITICS. We were both transplanted Southerners who had become liberals.  (“How could anyone in their right mind have voted for that malevolent monster?”) We exchanged confessions of youthful pratfalls and indiscretions and indulged in present jealousies. She said she wished she had grown up knowing the Bible stories so she could talk about them, and I mailed her little quizzes, starting easy and growing harder.

(Who gave Joseph a coat of many colors?

What did they do to him afterwards and how did it all turn out?)

During the past few years, I have been reading drafts of her memoir in progress.  I devoured it in all its stages. First it was called The Best That They Could Do, the “they” being her colorful, tormented parents. Eventually It became Writing for My Life, A Memoir.

“You should subtitle it An Emergency Memoir,” I told her, because the frame tale was her terrifying experience with manic-depression. Then she decided the memoir might upset some people so she was recasting it as a novel when she died. It was going to be about the older and widowed Dinah, the young wife in Dale Loves Sophie to Death. (“I’m going to give Dinah my manic depression and family history.”)

Maybe the “emergency memoir” will see publication in time. Time, that precious commodity.

Oh, Robb, I already miss you so. I feel robbed. When I realized that this was the exact word I wanted, I quickly looked up its origins to render the pun more respectable. ( “To rob”: Old English reafian, Middle English reven—also see the word reave)

Your middle name is Reavill: that somehow does the trick.