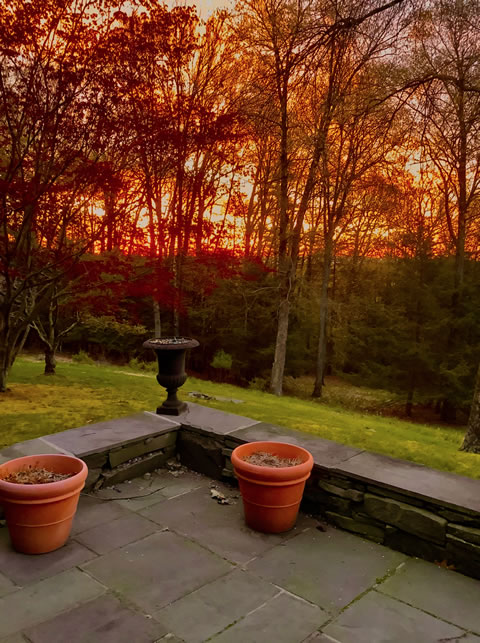 It is quiet up here on the hill in Woodstock. Recently I realized it was too quiet and it took me a moment to figure out why. What was missing was the intermittent overhead noise of a southbound jet from Albany cutting through the sky, rising in pitch and leaving a trail as it gained its cruising altitude. How many times aboard such flights have I counted the takeoff minutes until I was pretty sure I was looking down on “my” hill? 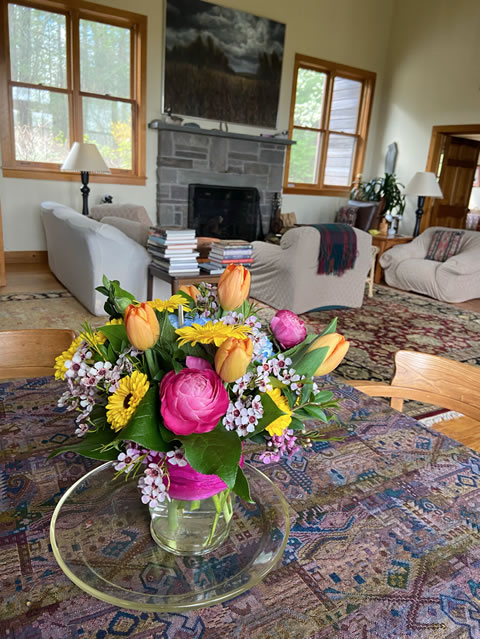 This past Wednesday was the pub date of my sixteenth novel.  I have eaten all the scrumptious chocolates and twice changed the water of the gorgeous flowers.  Amazon’s price for Old Lovegood Girls has gone from $27.00 to $24.23, and is currently #60 in “friendship fiction.” I have received one of the most gratifying reviews of my life from a major newspaper. Now I hunker down to await the the less pleasant ones that are sure to come.

I miss the old cocktail hour contests with Robert when we compared our worst reviews. (“Waves of boredom swept over the audience when Robert Starer’s concerto…”) (“Gail Godwin hits us over the head with…”)

My two Zoom appearances on “The Mighty Blaze” went well, thanks to the tutorial with Joseph Moldover and the penetrating questions asked by my interviewer Jenna Blum. It’s never flattering to see oneself as others see you, but she coaxed interesting answers out of me which I continue to  ponder.

Way We Live Now swallowed prussic acid and Lady Carbury the scribbler married Mr. Broune, the editor of the most serious newspaper, who advised  her to stop writing novels.

Then I went on to Doctor Thorne and then on to Framley Parsonage. The last time I read Framley Parsonage, I was homebound on a flight to  Albany. I was having an engaging dialogue with the man in the seat next to me. After a while he asked me if I was a nun. Why did he think so? I was wearing a gray skirt and navy blue jacket over a black turtleneck, and a gold filagree cross on a chain. Well, the book you are reading, he said.

The flight had a long layover and we had a wonderful dinner in the airport restaurant. His wife was an invalid and he was planning a solo sailboat trip down the inland waterway. As we parted in Albany, he said, “If such a thing were possible, you would have been the perfect companion for my trip.”

I sometimes think of that man when I am trying to describe “an interesting stranger” in my novels. I can’t recall his facial features or his body type or even his age. Only the distinctive rapport. In Old Lovegood Girls, toward the end of the book, I placed such a man in the next seat to my protagonist on an airplane. 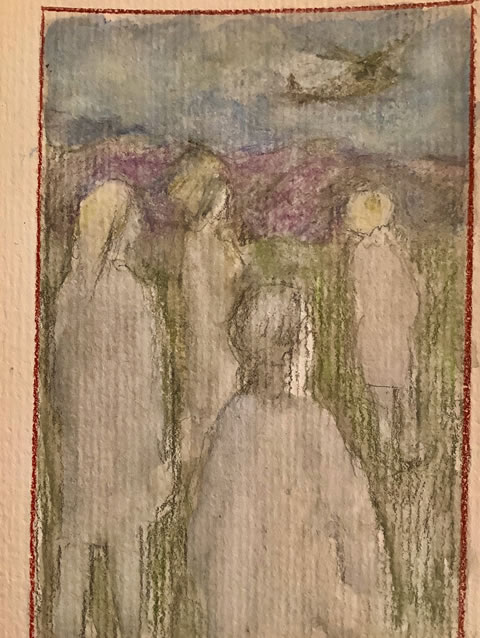 She was not in the mood to talk, so she looked sternly out the window until he had settled in and lapsed into some deep inner space “like someone taking advantage of the empty seat beside him.” Only after the plane had landed and taxied to its gate, did he ask her, “Is there anything I can lift down for you from the overhead bin?” She describes her suitcase and he takes it down, sets it upright, and pulls out  its handle so that she is ready to precede him down the aisle. He was a man in late middle age “with an interesting face and benign demeanor.” He looks at her at last. He says, “I want to thank you for the most restorative airplane ride I have ever had.” She is too surprised to have a ready answer and later decides perhaps it was better that she didn’t.

I have begun The Last Chronicle of Barset, a satisfying 860 pages, which  features the Reverend Josiah Crawley, who is Trollope’s favorite character and also mine.

Though I managed to draw an acceptable picture of the father in an earlier blog, I haven’t yet found words to say how he looks.

Another “interesting stranger.” Why do I sometimes draw a blank when trying to write how someone looks?

That is one of the things I discussed with Jenna Blum in my Mighty Blaze interview. “Someone should write an essay about how characters look,” I said. She suggested that person might be me.

Perhaps the subject of another blog.

Below is a picture of the only recent visitor to my silent hill. If you tap it he may run away.