I am old enough to remember being a little girl old enough to read Eleanor Roosevelt’s “My Day” column, which was syndicated in the Asheville Citizen-Times six days a week. The president’s wife wrote where she was, who was with her, what people said, and what she was thinking and feeling. It was the only diary she kept. She wrote simply and truly, like an intelligent grandmother might describe her day to family members.

Wednesday this past week was the nineteenth anniversary of Robert’s death. He would have been 96, two years younger than

Prince Philip. Usually on April 22, Robert’s son Dan drives up from New York City, buys two sandwiches and two small bags of potato chips at the Woodstock meat market and we have lunch on the terrace and bring each 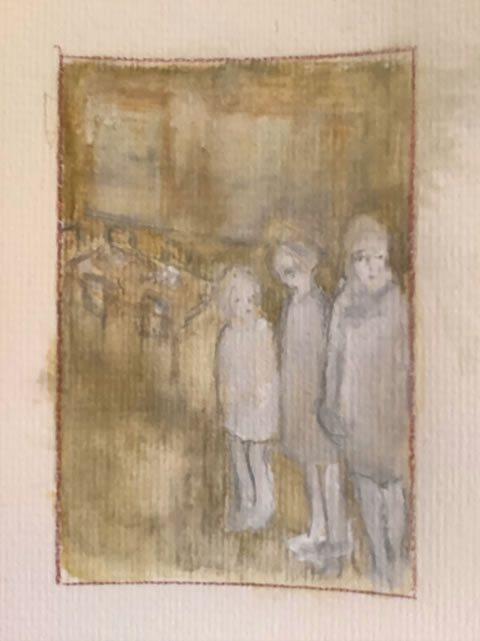 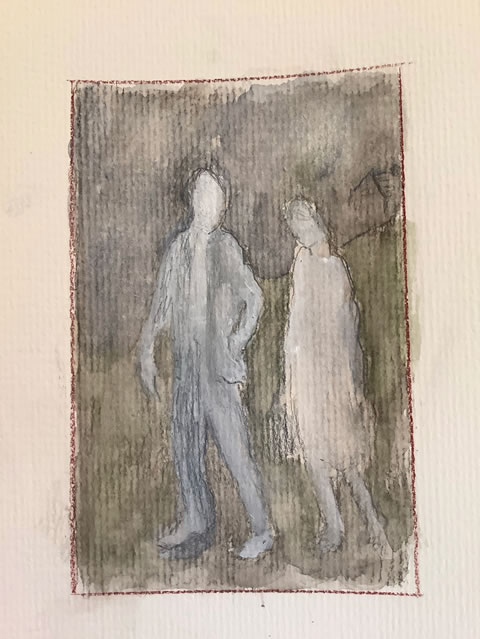 other up to date and remember Robert. Then I go back to work and Dan goes to the cemetery to say Kaddish at his father’s grave and drive back to New York. This year he couldn’t come because he was recovering from foot surgery and also virus-quarantined in Manhattan.

I continued on with my current novel Snowdrop. Having figured out how the father looks (see picture from last week), I was listening to him tell the new live-in teacher about his three daughters she is about to meet as they walk through the woods to his house. (See above drawing)

“Rose is a faithful student and good at so many other things. She sews, she gardens, she was the first to learn to cook. Lily is smarter, but she’s obstinate. She likes to bewilder you. And Violet—well, Violet is the spontaneous, imaginative child, but she’s below her grade average. I won’t say anymore because I want you to judge for yourself. Violet was a twin, you see, for the first three years of her life.”

I also worked on a Q&A interview with Marshal Zeringue for his Campaign for the American Reader, to go online after May 5, 2020, when Old Lovegood Girls is published. I did one of these with him for Grief Cottage (2018), but I didn’t spend as much time on it. His questions come at you slightly sideways and make you conscious of deeper possible answers. But I go very slowly and thoughtfully this time round.

This may have something to do with my current obsession with telling the truth.

Which has sent me back to George Orwell’s essay “New Words” (1940) in which he asks, “Is not anyone with any degree of mental honesty conscious of telling lies all day long, both in talking and writing, simply because lies will fall into artistic shape when truth will not?”

Yes, but there will come a time, I promise, when those ready-made phrases don’t come tumbling out so acrobatically. One of the graces of old age is that because I often draw a blank and have to go digging and WAIT for what I really mean, I sometimes ACTUALLY FIND IT.

Many years back, someone from the Woodstock Times came to interview me. He asked what I was reading. I said a whole lot of things. Where do you do your reading? Oh, in bed. He asked if he could take a photo of my bedside reading table. He lay down on the floor and shot a portrait of the stacks. He was a lawyer. Some time later, I had a run-in with a state trooper who had given me a speeding ticket. $75, and it would go on my license. I phoned the lawyer. Could he help me get if off my license? He said he’d try. He contacted the trooper and called me back. “What did you do to him?” “I got out of the car, and he screamed, ‘get back in the car!’ and wrote me a ticket. And I told him he was a bully.” The lawyer accompanied me to court. The trooper was absent and I paid the $75.

The next book I order is going to be Mrs. Roosevelt’s “My Day” columns, which she wrote every day from 1935 to 1962. The last year of her life she wrote the column every other day because she was too sick. 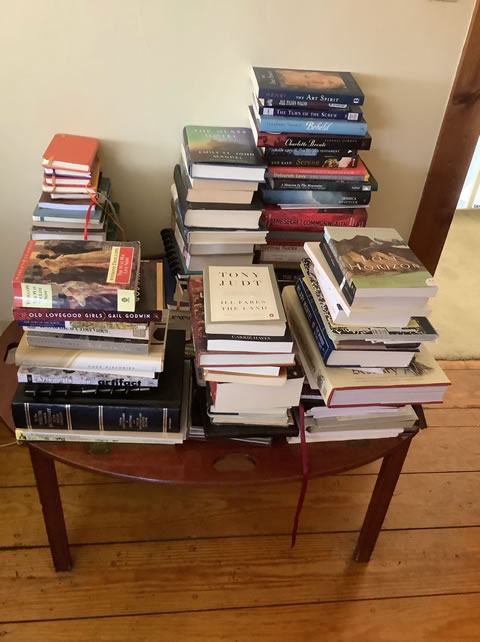